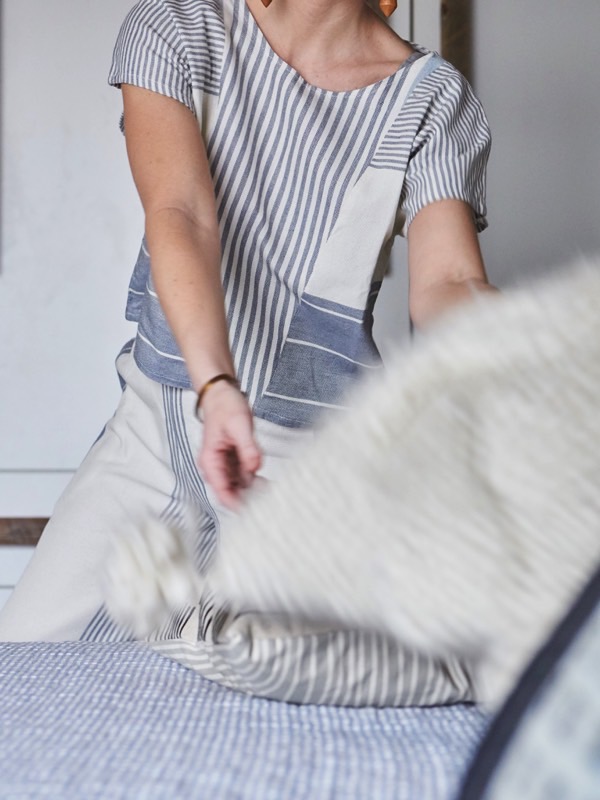 One of the greatest shifts in my marriage, possibly in my adulthood as a whole, has also been one of the smallest shifts. It has slipped by unnoticed in the mundane tasks of laundry cycles and dish duty, a simple phrase that has ever so slightly changed the energy in our home:

I used to have a bit of a martyr complex.

I’d spend my Saturday mornings waking up early with a baby, feeding and rocking and shushing, then get to work cleaning the house while Ken (deservingly) slept in. I’d put Bee on my hip and we’d de-clutter the entryway, sift through the junk mail, return 800 pairs of shoes to their proper homes, all while I’d run the subconscious script in my head that I’m doing this for my family, these lucky creatures.

You can imagine, then, how lovely it was for Ken to wake up on these mornings – a sour wife in a spotless kitchen.

I no longer let the script run on those nameless Saturdays. I’ve shifted it slightly, and the shift has left seismic waves in my life:

It has taken me many years to discover that the purpose of marriage is not to change your spouse into someone more palatable, more convenient for you, someone who never fails to return his own keys to the entryway hook.

The honest truth is this: the sweet, crazed people in my home could care less where the keys hang. Ken hates shower mold but doesn’t mind a cluttered desk. Bee makes her bed with the precision of a navy seal, but leaves artwork strewn about the house like confetti in the wind.

I cannot handle a cluttered surface but am forever failing to use the grease splatter screen on bacon days.

So when I spend my mornings de-cluttering the house, I’m speaking my own love language here. There is nothing remotely martyr-ish about it, no resentment necessary.

I hear women speak often of self care, of how vital it is to rest in this season of our lives. I agree wholeheartedly, and if you’ll give me a quiet afternoon with a short stack of books and a tall glass of Chardonnay, I am a changed woman.

But I also agree that many areas of self care are so easily overlooked, are so easily placed into the martyrdom category. We mix self care in with others care and we confuse servanthood with sainthood.

(Never bring up a woman’s artisan candle collection in the heat of the moment.)

The crux of the matter was simple: the toaster was an eyesore, and the candles were not. She could choose form over function, but she’d need to recognize that it was her choice. She’d need to own it.

She’d need to say, simply: I’m doing this for me.

It was never a Her vs. Him argument. It was simply a Candles vs. Toaster argument.

Last weekend, after a busy season of planes and plans, of sickness and schedules, Ken offered me an afternoon to myself. I’d had high hopes to crack the spine on a new library read, to take a nap, maybe catch up on my emails, perhaps sneak in a walk and some quiet dinner prep?

But the house had grown messy in our busyness, and my love for order won out. There was laundry to catch up on, paperwork to sift through, a kitchen to clean. Ken came home to a spotless house, and a not-at-all sour wife.

Thank you, he said.

No thanks necessary, I said. I did it for me.

Finally, it was the truth.

p.s. Speaking of doing things for me, I finally sat down and designed my dream daily planner. It’s here, if you’d like your own!

The toddler and I are the first ones to rise in the morning, so we have all the time in the world to prep a slow and simple breakfast while... END_OF_DOCUMENT_TOKEN_TO_BE_REPLACED